The Background of Dirty Electricity

It all started with the light bulb, when Thomas Edison discovered electricity in 1880. The form of delivery he chose was called “direct current” and it could only travel for a few miles without losing its strength. Nikola Tesla, with the limitations of direct current in mind invents alternating current capable of delivering power across whole countries. According to Epidemiologists like Sam Milham, mankind’s health has been seriously jeopardised ever since. “there is high likelihood that most of the twentieth century “diseases of civilization,” including cardiovascular disease, cancers, diabetes and suicide are not caused by lifestyle alone, but are contributed to by certain aspects of electricity itself.
Sam Milham, MD,MPH., Author of Dirty electricity – electrification and the disease of civilization.

Dr Olle Johansson, Ph.D. “Existing residential alternating currents are delivered at 60 Hz, with about 60 cycles per second, (50hz-50 cycles in Australia). In the case of the wireless Internet (WI-FI) connections that pervade our cities without any regard to public health, electrical field currents can change direction at a speed of approximately 2.45 billion cycles per second. Waves of 2.45 GHz have only been in existence for 10 – 15 years and are extremely elevated compared to the very weak earth and cosmic magnetic fields in which living cells have existed in for thousands of years.”

Dr. Johansson underscores the fact that the human body, whose cells, nerves and organs function with electrical impulse, has a difficult time adapting itself to 60htz and 50htz frequencies, and has an even more difficult time with higher ones. We added wireless transmissions many decades ago in the form of radio waves and radar and now in the past two decades our bodies have had to contend with microwave frequencies/wifi every minute of every day. Our body’s cells rely on electrical impulses to regulate the many processes that keep our bodies functioning properly, electrical and magnetic fields and higher frequencies interfere with the human bodies electrical system, suppressing our immune systems and results of this interference can lead to serious debilitation and illness.

Recently another form of electrical pollution has surfaced as a result of voltage efficient devices such as computers, plasma/LCD screens, and CFL’S. Electromagnetic radiation, EMR is produced from voltage efficient devices spiking the 50htz wave of 240 volt electrical supply in our homes; it also rides on street wiring coming into our homes. This EMR or dirty electricity is in the biologically active frequency of 4 kHz to 120 kHz. How long do we think we all can get away without being effected by all this radiation, many already are, they can’t live in society anymore. Even now, if you feel you yourself are not affected, you will soon know someone who will be. I am not saying to rid ourselves of new and emerging technologies, but the time has well and truly come when common sense says we must protect ourselves from this form of pollution as much as we can. I can’t imagine what our new young generation will suffer having been born into a veritable bath of man-made frequencies. There is so much evidence out there now as to how detrimental man made frequencies can be to our bodies, for instance childhood cancers in the form of brain tumours are now the number one form of cancer in children in Australia.

The good news is I have personally seen peoples health improve when adopting sensible measures for protection and we at Positive Filtration are dedicated to helping people become informed and offer solutions to minimise the Harmful effects of this ever growing plague of the 21st century. 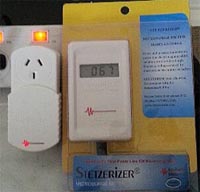 Stetzer filters for Electromagnetic Radiation. Come in a box of 15, with or without meter.

Watch the do it yourself filter install
for Electromagnetic Radiation. 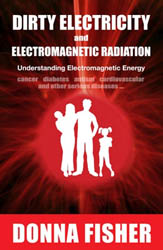 Dirty Electricity is the underlying menace; causing cancer, speeding up its growth and killing millions of people.